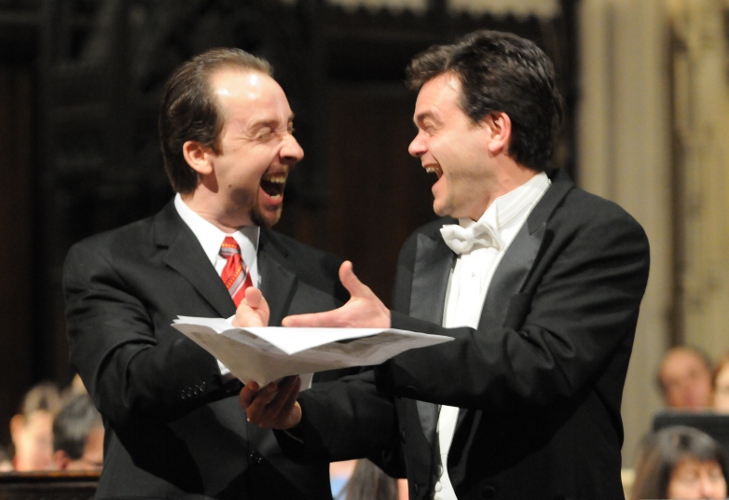 (as Tom Rakewell, with David Kravitz as Nick Shadow. Photo by Julian Bullitt)

Past performances include Bach’s B minor mass with Orchestra Iowa and the Apollo Chorus of Chicago; Mozart’s C minor Mass with Music of the Baroque (Chicago); Handel’s Messiah with Saint Paul Chamber Orchestra; the role of Belmonte in Mozart’s Abduction from the Seraglio with Emmanuel Music; Monteverdi’s Il Ritorno d’Ulisse, Vespers of 1610, L’Orfeo, and assorted madrigals with Boston Early Music Festival; Bach’s B minor Mass with the American Classical Orchestra (NYC) at Lincoln Center; and St. Matthew Passion with the American Bach Soloists (SF, CA). He has appeared with the Bach Choir of Bethlehem, Handel and Haydn Society, Boston Baroque, and Charlotte Symphony.

He is a core member of Emmanuel Music, and regularly appears in their ongoing Bach Cantata series. With Emmanuel he has sung the Evangelist in Bach’s St. John and St. Matthew Passions; and sung the roles of Tom Rakewell in Stravinsky’s The Rake’s Progress, Tamino in Mozart’s Magic Flute, and Lurcanio in Handel’s Ariodante. He appeared in John Harbison’s The Great Gatsby in Boston and at Tanglewood.

In 2019 he appeared at the Tanglewood Festival of Contemporary Music in the US premiere of Gerald Barry’s “Canada”. With Boston Modern Orchestra Project he has appeared in Wuorinen’s Haroun and the Sea of Stories; and in Virgil Thomson’s Four Saints in Three Acts (the latter now a commercial recording). He gave the US premieres Rodney Lister’s chamber song cycle Friendly Fire with Collage New Music, and Rautavaara’s song cycle Die Liebenden. On short notice he appeared in Berio’s Sinfonia under conductor Robert Spano at Tanglewood; and appeared in the world premiere of Osvaldo Golijov’s Ainadamar at Tanglewood and Los Angeles’ Walt Disney Hall, starring Dawn Upshaw.

A recitalist of wide repertoire, he has performed Schubert’s Schwanengesang at the Token Creek Festival (WI); Winterreise at Tufts University; Auf dem Strom and Brahms songs with Boston Chamber Music Society; and Janacek’s Diary of One Who Disappeared at Monadnock Music (NH). He gave recitals of contemporary American music in New York, Boston, London and Manchester UK, with Rodney Lister at the piano.

Charles Blandy is a member of Beyond Artists, a coalition that supports good causes through their work. He studied at Oberlin College, Indiana University, and Tanglewood Music Center. He is the product of a strong public school arts program in Troy NY. charlesblandy.com